Cinnamon is a spice obtained from the inner bark of about 12 different species of trees. It has been used as a spice since before 2000 BC.

The 4 most common types of cinnamon are:
1.) Cassia (aka Chinese Cinnamon)
2.) True Cinnamon (aka Cinnamomum Verum or Ceylon Cinnamon)
3.) Burmanni (aka Indonesian Cinnamon)
4.) Loureiroi (aka Saigon Cinnamon or Vietnamese Cinnamon

You want to use True Cinnamon – which likely comes from Sri Lanka and can be up to 10x the cost of Cassia Cinnamon (which is the most popular type of Cinnamon in the US).  A picture of True Cinnamon is shown on this page.

Why We Recommend True Cinnamon

The reason is because all Cinnamon contains a blood-thinning agent called Coumarin – which is recommended for moderate consumption only. Frequent ingestion can cause liver damage. The amount of coumarin in True Cinnamon is 0.017 g/kg. The amounts of coumarin in Cassia, Brumanni, and Loureiroi are 0.31, 2.15, and 6.97 g/kg, respectively. In other words – there is 18x as much Coumarin in Cassia Cinnamon as True Cinnamon! Or 410x as much Coumarin in Loureiroi Cinnamon as True Cinnamon! Only true cinnamon is advised for consumption on a regular basis, however, ~70% of the cinnamon consumed in the US is Cassia cinnamon.

As an added benefit – true cinnamon tastes better as is often used by high end bakeries.

We use True Cinnamon in our Ancient Delight Superfood Mix.

*Percent Daily Values are Based on a 2,000 calorie diet.

Always Discuss
with your doctor.

Always discuss
with your doctor

This information is not meant to replace your doctor, but to work in tandem with your doctor’s advice. This website makes it easy for you and your doctor to select the best foods and the best smoothie recipes that you should be eating.

My Nutrition Advisor does not diagnose, cure, or treat disease. 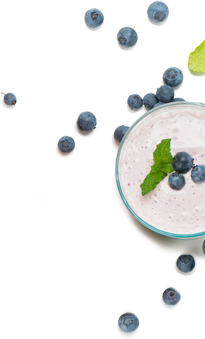 Animal: Cinnamon may be beneficial in MS patients and that no other existing anti-MS therapies could be so economical and trouble free as this approach. It may have a therapeutic role in multiple sclerosis.

Cinnamon has a beneficial effect on cholesterol in people with diabetes. It reduces glucose, A1C and improves cholesterol levels.

Human: Cinnamon has positive effects on inflammation and muscle soreness from exercise. Animal: It suppresses age related inflammation. In Vitro: It mimicks the function of insulin in adipocytes.

Human: Cinnamon significantly reduces the severity and duration of pain during menstruation, but this effect is less compared to that of ibuprofen. It reduced insulin resistance parameters in polycystic ovary syndrome.

It has a preventative effect for Alzheimer’s disease.

Has a positive effect on inflammation and muscle soreness endued by exercise in a human study. Cinnamon is found in the Ancient Delight Superfood Mix.

Animal: It has therapeutic activity against oral Candida infection. In Vitro: It exhibits antimicrobial activity against Candida Albicans. It inhibits multi-resistant strains of bacterial and yeast.

Animal: It has significant effect on serum and liver urate levels. In Vitro: Cinnamon may protect the liver from acute alcohol-induced steatosis (fatty liver).

Animal: It potentially suppressed the growth of human leukemia or skin cancer.

How Our Scoring System Works

For each health goal, we assigned a score to each recipe and each ingredient. This helps you better understand the correlation that medical research is suggesting between foods and benefits to various health goals. Our scoring system is based on REAL RESEARCH published on pubmed.gov. This is a website that curates over 25 million different biomedical journals.

What we consider when creating your scores: